New Zealand’s bustling capital is often seen as a transit point to make connections between the North and South Islands. However there is much more to Wellington, with its pleasant harbour front area that includes the excellent Te Papa museum.

Wellington is built around a hilly landscape; houses cling to steep hills and high rises occupy the precious flat space in the city centre. Due to the lack of flat space Wellington began building multi-storey office buildings early on, and the town has a real big-city feel even though there are only 420,000 residents. The hilly terrain also prevented a lot of the suburban sprawl that you find in Auckland, making it an easily walkable city.

Like Auckland, New Zealand’s windy city is built around a spectacular harbour. This isn’t as big a feature in Wellington but the suburban ferry services make good day trips.

Apart from Te Papa, Wellington’s attractions include the Bond Store, a maritime museum; the Beehive, Wellington’s parliament house and the popular cable car ride between Lambton Quay and Kelburn.

Metlink is Wellington’s integrated public transport network, which is comprised of buses, trains, ferries and a cable car.

Fares are calculated according to a system of 14 fare zones. Most areas within central Wellington fall within zones one and two, although you will need to travel three zones to go to Seatoun or Miramar and four zones to the airport. Cash fares are $2 for one zone, $2.50 for two zones, $5 for three zones and $5.50 for four zones.

Although routes and the basic fare structure are established by Metlink, the actual bus routes are operated by a number of private companies.

If you're spending most of your time in central Wellington, then the Snapper card is probably the most useful, particularly as it can be used on airport bus routes.

The BusAbout ticket ($9.50) is a one-day pass that gives you unlimited travel in the Wellington area on buses operated by Go Wellington and Valley Flyer, however it cannot be used on airport bus services. This ticket is value after 9am Mon–Fri and all day on weekends.

The Metlink Explorer ticket costs $21 and is good for unlimited travel after 9am on weekdays and all day on weekends anywhere on the Wellington rail network except the Wairarapa line north of Upper Hutt as well as on all buses operated by Go Wellington, Mana, Newlands and Valley Flyer buses (including airport buses).

Wellington’s cable car is one of the city’s major attractions. The vintage cable car runs from the terminus on Cable Car Lane (off Lambton Quay) to the Botanic Gardens at Kelburn, via the university. The cable car runs every ten minutes (Mon–Fri 7am–10pm, Sat 8.30am–10pm, Sun 8.30am–9pm). A one-way fare is $4, return fare $7.

The Dominion Post ferry departs Queen’s Wharf for Days Bay, Seatoun, Petone and Matiu Somes Island. The ferry to Days Bay is a popular day excursion from Wellington and worth considering if you want to escape the city. The fare to Days Bay is $11 each way.

For a small city, Wellington has a fairly good urban rail network consisting of 49 stations on four lines. Most train services run every 30 minutes.

Wellington’s train station is conveniently located at the northeastern edge of the city centre making the train a good way to get around – particularly if you want to visit the Kapiti Coast or Hutt Valley.

You can buy tickets from train stations and also on board the train. When the train arrives at a station you have to push the button for the doors to open. Unlike rail networks in other cities, the doors don't automatically open. 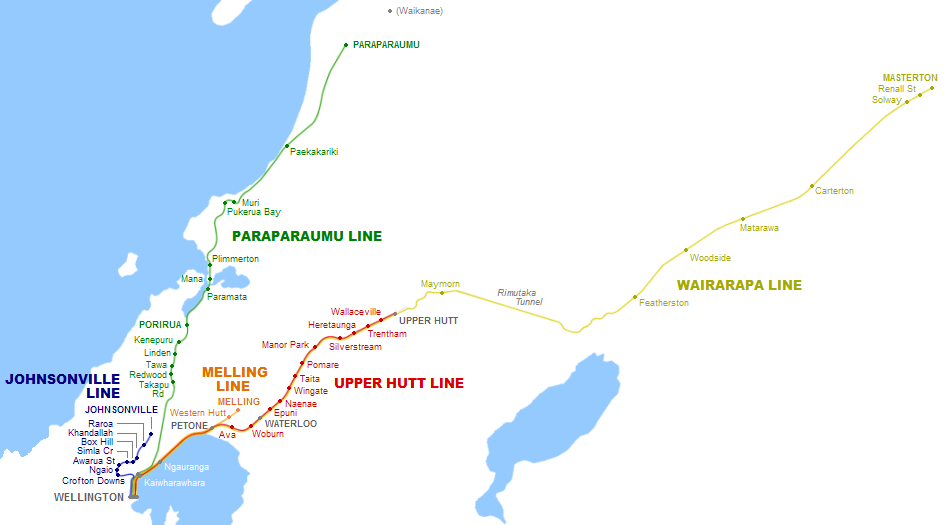 Train fares are calculated according to the same fare structure used by Wellington's buses, although there are cheaper off-peak fares available only for people travelling by rail.

A Day Rover ticket costs $14 and is good for unlimited train travel after 9am on weekdays and all day on weekends anywhere on the Wellington rail network except the Wairarapa line north of Upper Hutt. A three-day Weekend Rover ticket (valid from 4.30am Friday until midnight Sunday) costs $21.

The Metlink Explorer ticket costs $21 and is good for unlimited travel after 9am on weekdays and all day on weekends anywhere on the Wellington rail network except the Wairarapa line north of Upper Hutt as well as on all buses operated by Go Wellington, Mana, Newlands and Valley Flyer buses (including airport buses).